I did Hampta Pass Trek with IndiaHikes.

Hampta Pass trek is one of the most beautiful treks in the Manali region of Himachal Pradesh. The trek starts near Manali and ends in the Lahaul region.

Trek Details at a Glance:

The following details my tale and experiences that I witnessed while walking among the routes of the Hampta Pass.

Day 1: Manali to Chika through Jobra

Our trekking group was supposed to meet in Manali. Traveling from Delhi, even reaching Manali was an adventure on its own for me. Through my journey, I witnessed the congested roads of Delhi transition into the freeing elevations of Himachal. As I reached closer to Manali, I found myself struggling with this overwhelming feeling of excitement.

Despite the 14-hour journey that I subjected myself to, I couldn’t feel any sense of exhaustion. All I could feel was the undeniable craving for adventure and to escape the familiar roads of Delhi. 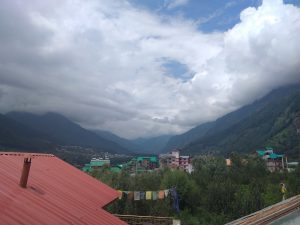 Eventually, as I was losing myself to the natural sights of Himachal, I arrived in Manali to officially begin my expedition to the Hampta Pass. Reaching the meeting point, I realized that others, who had opted to be a part of the trek, had a similar intent to escape their everyday routines. Meeting our guide and after exchanging greetings with other trekkers, we began our drive to reach Jobra.

Manali, being already at a heightened elevation of 6,700ft, demanded me to adapt to its drastically different weather patterns but our destination, Jobra, sat at an elevation of 9,800ft. Initially, this did evoke a sense of nervousness but I soon overcame it with the curiosity of witnessing something new.

When you reach altitudes above 8000 feet there is a probability of one getting Altitude Sickness or AMS.  Fortunately, I had not developed any symptoms of AMS.

After a two-hour drive, we reached our destination. It was now time for conquering the elevated terrain on foot. There was a three-hour trek in front of us that we had to traverse on foot before pitching in our tents. Commencing from the AllainGuhugalHydel Project Junction, we crossed the main road to arrive narrow path that led us to dense yet beautiful forest comprising of pine trees.

While a few others seemed to be hesitant to be traversing through a forest, the place ironically felt safer to me. It felt as if the trees within the forest protected us and paved our way to other wondrous sights within the trek. Proceeding through the trails, I could see a meadow in the distance that was colored with the brightest shades of green. Witnessing cows and sheeps grazing peacefully in the lush green meadows of Himachal made for a sight that was comparable to being something out of a fairy tale. Traversing further, we arrived at the meadow and climbed a nearby hill which soon turned into a quick descent to Chika. The Chika Campsite combined beautiful hues of green with the fierce shades of blue that the Rani River bestowed upon the land. I couldn’t be gladder that this exquisite site was supposed to be our first camping location.

The playful rays of the sun graced the fields of our camping site to mark the beginning of a new day. Personally, I was glad for the much-needed warmth. Apparently, I hadn’t adapted well enough to the bitter yet brilliant cold of the night. We began the trek traversing along the left bank of the river. The terrain eventually transitioned to an elevated slope of boulders with relatively rougher terrain. Proceeding through the trail, we were greeted by a soothingly ethereal collective of Rhododendron Trees that lined the edge of the river.

In the distance, I could hear the fierce growl of a waterfall.  The clear and mighty streams of the waterfall didn’t disappoint at all. While others were busy filling their bottles for the journey ahead, I got lost admiring the sheer brilliance of the place.

After the waterfall, our next challenge was to cross the river to get to the other side. Most of the people elected to skip stones to reach the other side and I decided to cross the river by walking through the stream. The water was absolutely cold but the sense of the same somehow delighted me and honestly, I don’t regret my decision. We eventually reached Jwara which was this valley that was enclosed by the mighty snow-clad peaks of the Himalayas at one side and was adorned by the fierce flow of rivers penetrating the valley on another side. Our ultimate destination was resting right behind the frosted peaks that stood in front of us. 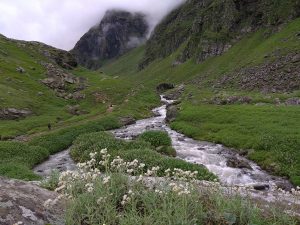 Traversing along the riverside, we were welcomed by a bed of multi-colored flowers which seemed to be trying to paint a picture on their own. Proceeding through the end of the valley, we reached BalukaGhera. This was a campsite which was adorned with a deep bed of snow and intricately lined random rock patterns. We pitched our tents here for the second day.

The day arrived when we would witness the Hampta Pass. Today I was better acclimatised to the weather and altitude by in no way Hampta pass would be an easy climb. The day’s trek was supposed to span 9 hours and we were supposed to reach an elevation of 14,100ft at the Hampta Pass.

The first checkpoint was at the base of the mountain that we were admiring the day before. The trail was lined with a soft and vibrant bed of orange flowers as they were dancing in the cold breeze of the Himalayas. This is where our climb began. Climbing from the base of the mountain, we eventually reached a plateau which further led to a ridge. 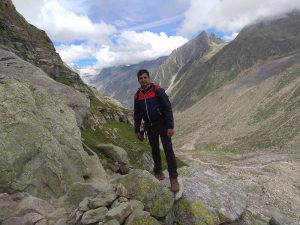 Progressing and struggling through the climb, we were faced with a strictly vertical slope before we could lay our eyes upon the Hampta Pass. After 15 minutes of an extremely arduous climb,  we finally reached Hampta Pass. The sheer feeling of being conquering the climb to the Hampta Pass made me feel like I was on top of the world.

What followed was a challenging descent. The descent was almost overwhelming since I couldn’t even see where the base was. 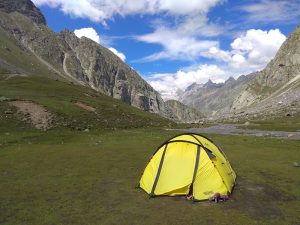 Eventually, enduring the thrilling slide, we reached the Shia Goru campsite to mark the end to our third day.

After spending the night with the clear night skies of the Himalayas, the day greeted us and gave us another trail to conquer. We were supposed to descent from 12,900ft to 11,000ft to reach Chatru. Initially, I was under the impression that the coming trail was going to be comparatively easier but I was mistaken.

The downhill trek was incredibly slippery at a few places and also led to the edges of the mountains and ridges that were in our way. Although, I can’t deny the fact that the varying terrain, sprinkled with a variety of rock formation, held its own kind of beauty. However, I had to be careful to not get lost in the beauty as I’ve been guilty of doing before.

Sliding through the terrain, we witnessed some of the most complex and the most brilliant glacier formation. I made sure to take out a few minutes to capture the beauty of the scenery and snap a couple of pictures with the fellow trekkers. 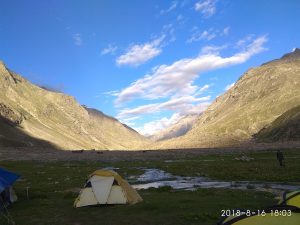 Crossing the glaciers, we reached our final camping site that was Chatru. Sitting between three magnificent passes of Hampta, Spiti, and Rohtang. I’m sure that my heart skipped a beat when I first laid my eyes upon the camping site. With frosted wonders of the Himalayas enclosing the site, it was certainly a sight to behold.

The day dawned and I realized that it was time to head home. With a heavy heart, as I packed my gear for the drive back to Manali, I went out to admire the wondrous sights for one last time. Driving back to Manali was drastically different from how it was before. I was not travelling with a pack of strangers now. They were my friends who had conquered a  mighty pass of the Himalayas with me.

How to reach Hampta pass?

How is Hampta pass Trek?

How long is Hampta pass Trek?