Kedarkantha Trek is the perfect preparation for a beginner in the cold temperature of Himalaya mountains in India.

With a reasonable degree of physical fitness, one can confidently set out on Kedarkantha trek and get to sample everything that the best of an Indian Himalayan trek has to offer. This trek is also highly recommended for first-time trekkers wanting to experience snow trails and camping in the winter snow.

Here I share my experiences of the Kedarkantha trek in early December when the air was certainly chilly but the snow was yet to carpet the landscape.

The journey began on a crisp morning at the pretty Dehradun railway station just as the sun was curling up. We walked at the meeting point near the Dehradun railway station, a piping hot masala chai and a quick introductory session that acquainted us with the itinerary got us going on the drive to the Sankri Village. The 9 hours, 220-kilometre drive initially sounded a bit tedious, but I was glad to know that I was wrong. The drive had its own unique moments as we witnessed the plain lands transition into the brilliant elevations of the Himachal range. We were able to catch a glimpse of the snow-clad peaks of the distant mountain peaks as we progressed through our journey. The drive served as the ideal opportunity for the group to exchange warm pleasantries and to befriend fellow adventurers. Before long, we arrived near the Govind National Park with its soothingly natural sights of exotic flora. Through the curves of the mountain roads and forests, our vehicle reached the Sankri Village at around 5:30 PM. The drive was certainly long, but not stressful since the views were comforting and the atmosphere unhurried and relaxed. As everyone checked into their respective rooms, I elected to step out and explore the ambience by interacting with the local people in the village.

The sun changed into a faded ball of a golden gradient as the day drew to a close, and in a strange way, I was certain of the brilliance of whatever was about to come. 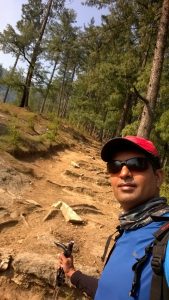 The second day of our journey commenced with a satisfying breakfast in the morning before we geared up for our first climb along the elegant slopes of the Kedarkantha trek. Our destination for today was Juda-Ka-Talab which sat at an elevation of 9,100 feet. We stepped into an extension trail that the locals refer to as the Sor.  As we crossed the bounds of Sankri Village, the roads seemed to grow wider as it curved to embrace the mountain ranges. Through the steadily elevating slopes and widening curves of the complementing roads and tall dense green trees, we arrived at a briskly flowing stream that was as clear as the shades of the sky of a bright and sunny day. 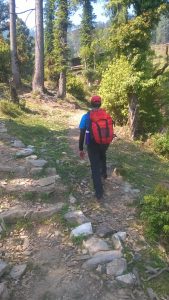 Our trek leader advised us not to rush into ascending the trail but instead start walking unhurriedly and gradually find one’s rhythm of ascending without getting tired or losing breath. This was a hugely helpful tip, especially for the first-timers among-st us who tended to make a nervous dash up the slope and invariably had to stop after a very short distance panting heavily for their breath. Contrast this with the more experienced, who were the proverbial wise tortoises and chugged along for long ascents without stopping to catch a breath and without compromising on soaking in the first sights along the trail.
After crossing several bridges, we were greeted by a dense collection of forests that pulled us away from all signs of civilization and ushered us into the open arms of nature. The trail was as much of an auditory experience as it was a visual one. Stepping deep into the core of the forest, all one can hear is the intense roar of the streams in the distance, complemented by the rustling of the leaves in the wind and the echoes of a variety of bird chirps. Continuing through the ever-elevating trails and a few streams, we arrived at the scenic site of Juda-Ka-Talab. 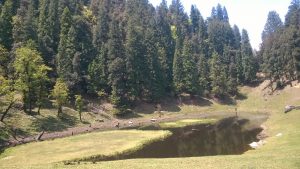 The analogy to describe Juda-Ka-Talab is that of a painting drawn by the deft hands of an impressionist painter on one of his happy cheerful days – a small lake on the canvas merging brilliantly with a dense family of Oak trees. We ended the day as we pitched in our tents in this painting!

Day 3: Juda-Ka-Talab to Kedarkantha Base 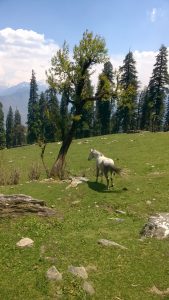 We woke up fresh on the third day with the objective of reaching the Kedarkantha base camp at the heightened elevation of 11,250 feet. The trail ahead seemed relatively straight forward, but we wise enough not to splurge our energies in wasteful activities given that during these initial days at higher altitudes the body is at all times acclimating and needs all the energy and leisure it has to do so. The trail led us to yet another forest of oak trees- perhaps it was our unhurried walk, perhaps it was the sense of familiarity, but the forest seemed more friendly and welcoming than ever. We witnessed occasional signs of civilization in the form of a few shepherd huts that sat gracefully at the edge of our trail. Halfway into the trail, we couldn’t resist the urge to take an extended break to refresh and relax as we sat around to admire the distant beauty of the arc-shaped collective of the frosted peaks of Kala Nag, Bandarpoonch, and Swargarohini. 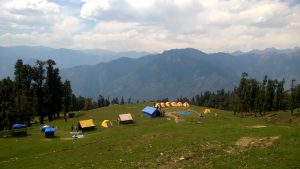 We eventually found ourselves at the Kedarkantha base camp, as though the unseen protective spirits of the forests led us there- such was the dreamy unhurried experience. We pitched in our tents and decided to the end the day admiring the dark canvas of the night which was lit up by a scattered stream of stars.

Day 4: Base Camp to Kedarkantha Peak and back

The dawn of the new day awakened in us a nervous excitement of the long and scintillating summit day.  We had to elevate higher to a height of 12,500 feet for reaching the Kedarkantha Peak before eventually descending towards the Hargaon camp that awaited us at a comparatively lower elevation of 8,900 feet. The trail ahead was certainly a challenging one but was also supposed to reward us handsomely with the views that one can witness from the peak.

Through a dense collection of Oak and Pine forests, we began our climb to the peak. As the trail continued further, the climb steadily became more demanding. Eventually, struggling through the rapidly elevating slopes, we were graced by the Kedarkantha peak. Sitting effortlessly at an elevation of over 12,000 feet was a temple dedicated to Lord Shiva and Goddess Parvati. After taking our blessings from the Lords in silent prayer, we sat down to admire the 360-degree views around us of the brilliantly lit Himalayan peaks. The winds and the sunlight on our face told us that this was no coffee table book experience- we were right there amidst all that glory, one with that glory and it certainly wasn’t an imagination!  Standing tall at the centre of this Himalayan sight, the undeniable sense of having achieved something significant in life silently overwhelmed everyone as the cold and familiar winds of summit fluttered against us. After a good 45 minutes of savouring these unique sensations, we reluctantly began our descent to the base of the summit frequently straining the neck back to witness the drama at the summit just that one more time. The evening at the Hargaon camp was short and the night long. Everyone was in a celebratory mood offering congratulations to each other and gratitude to the trek leader and the support staff for making the trek happen. No one wanted to quickly retire to their tent and call it a day. The cheers continued late into the night.

Day 5: Base Camp to Sankri

This would be an entire day of descent. Having finished with the challenges of a summit day, we now continued the new day with the general sense of cheer of the previous night that continued over a relaxed and compelling breakfast.  We readied ourselves to familiarize ourselves with the trail of Kedarkantha trek once again- now in the opposite direction! Descending through now nostalgic forests of oak and pine, we were greeted by the familiar sounds of streams, rustling winds, and chirping of birds. The path was conveniently laid out for us and was beautifully littered with leaves, worn-out stones and pebbles. As we progressed through our descent, we made a quick stop in a forest clearing for refreshing ourselves and suddenly noticed the distant view of the Har Ki Dun valley – a valley that is commonly referred to as the valley of gods and is believed to be the route through which the five Pandavas made their way to paradise. Getting to know these local beliefs and culture significantly enhanced the experience of our journey. Proceeding further down the trail and after once again experiencing the exquisite sights and sounds of the crystal clear waters of the streams and glimpses of occasional local wildlife such as the Himachali Langurs, we arrived back at the Sankri Village. A quick wash later we all huddled together over a lovely chai and refreshing snacks showed off the elegant sights that we captured on our SLRs and smartphones and talked about the possible coming together once again to do the trek.

On the last day of our journey, most of us found ourselves not wanting to head back to our respective homes. We had to force ourselves to pack our belongings and step back into the car to make our way back to Dehradun. The 220-kilometre journey back seemed much different than how it was initially. Instead of wishing that we could shorten the distance somehow, most of us were wishing to make the journey just a little longer so that we could reminisce about the adventure, the driver having to urge us to finish our tea and lunch stops quickly!

Experiencing the heights and breadths of the mighty Himalayas on foot seems daunting and sometimes impossible for the normal urbanite. I know that most of us confine ourselves to only dreamily admiring stunning photographs in coffee table books and screensavers; or just waft through a column or two by another dreamy writer of the Himalayan mountain-lore, myths and legends on a lazy Sunday afternoon. If however, one is willing to exert just a wee bit more than that and prepare in right earnestness to actually experience it first-hand, the Kedarkantha trek is a perfect starter for adventure seekers.

How do I get to Kedarkantha Trek?

How can I go to Sankri from Dehradun?

What is Kedarkantha temperature in winter?